Alan Terricciano was educated at Yale University and the Eastman School of Music. He is a Professor of Dance and Associate Dean for Undergraduate Affairs at the University of California, Irvine’s Claire Trevor School of the Arts, joining the faculty in 1994. Having created over 100 original scores in the past 35 years, Mr. Terricciano has been professionally active as a composer for choreography, the theater and the concert hall, working with the Minnesota Orchestra, Northwestern University’s New Music Ensemble, the New Swan Shakespeare Festival.  He has collaborated with choreographer’s Colin Connor, Liz Lerman, Donald McKayle, Doug Nielson, Jeff Slayton, Gus Solomons Jr. and many more. His newest work, Mission Cassini, for solo organ was premiered by David Ball at the International Guild of Organists conference held in Anaheim, CA, in July of 2019.  At UCI he recently premiered a new score for violin and piano, Closer Orbits, for choreographer Chad Michael Hall in 2017, and a score for choreographer Charlotte Griffin in 2016 – a song cycle for baritone and piano featuring the poetry of Ted Kooser. In the summers of 2014 through 18, he wrote the incidental music for the New Swan Shakespeare Festival’s productions of Midsummer Night’s Dream, As You Like It, Twelfth Night and Macbeth. In April 2011, Northwestern University premiered his Harp Concerto, The Parting Glass, with Erin Ponto-Freund as harp soloist.

As a pianist, he has performed for choreography throughout the United States, in Europe, and in Asia, including City Center in New York with the Alvin Ailey American Dance Theater, the Sejong Center for the Performing Arts in Seoul, Korea, the Paris Conservatoire, the Joyce Theater in New York, the Ford Amphitheater in Los Angeles, and the Carpenter Performing Arts Center in Long Beach, CA. In 2006, Terricciano was named Orange County’s Outstanding Individual Artist of the Year (2005) by the organization Arts Orange County. In 2000, He won the Grand Prize in Quebec’s Festival des Arts de Saint-Sauveur international competition for original composition for choreography with his work Blue Motions for String Quartet, and rechoreographed by colleague Chad Michael Hall for Dance Visions 2020 in February. 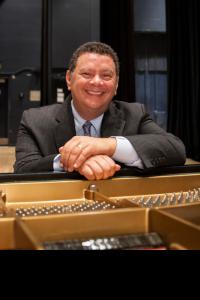